How to design a basic overdrive pedal circuit

You may have noticed that I’ve been dabbling with some DIY books over on Amazon’s kindle platform recently, and that has had me playing with breadboards again. Todays blog is inspired by some of the comments I’ve been getting, like this one: 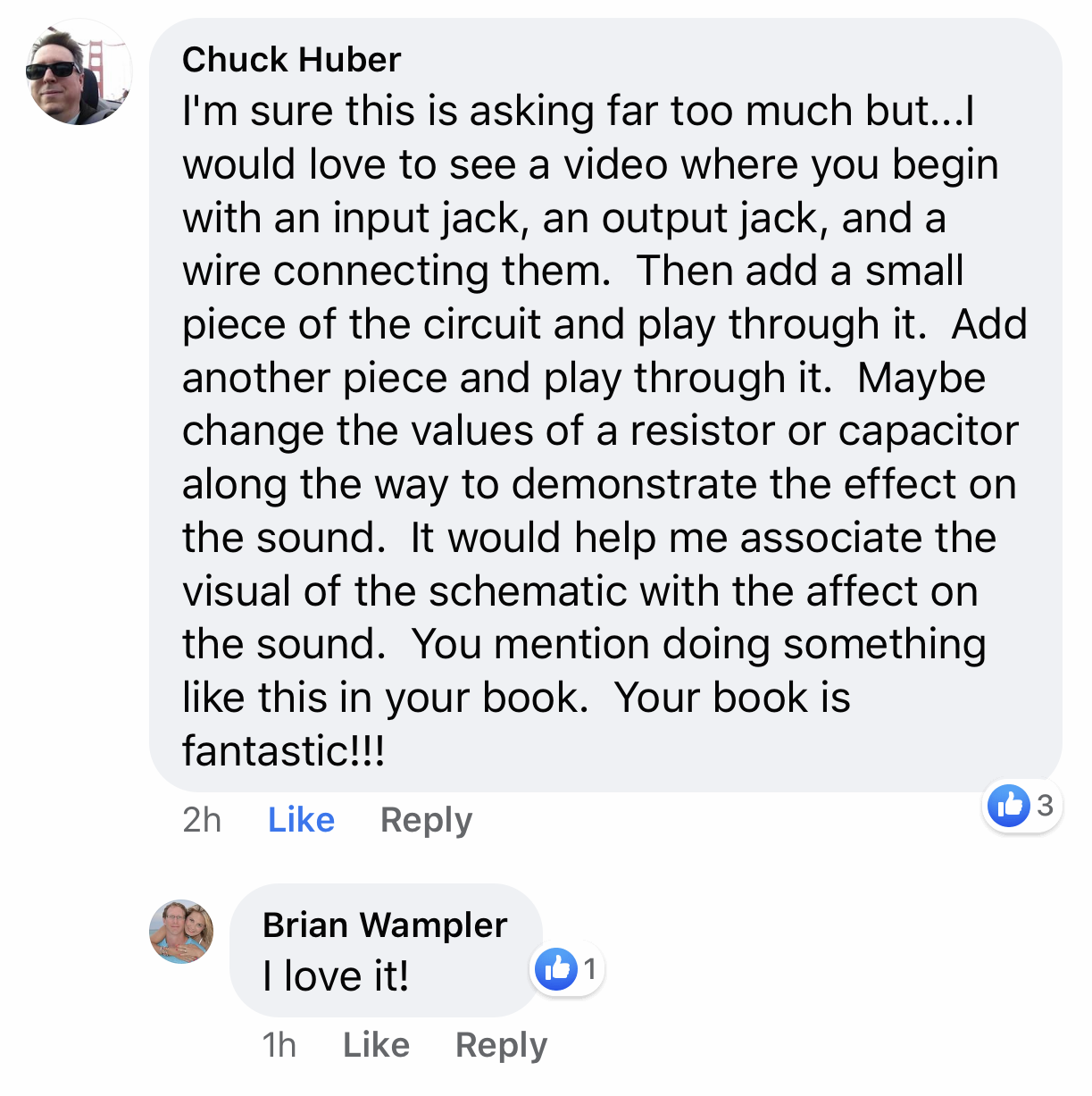 I always love the idea of helping us guitar tone enthusiasts understand roughly what’s going on with guitar pedal circuitry. Its a chance for me to get nerdy with a circuit, and it’s also fun to dispel some common myths too 😉 Win – Win.

So, let’s dive in and learn a bit about what goes into creating a very simple overdrive pedal circuit… The circuit “starts” with the guitar signal – the V1 shown above this indicates it is a simple audio signal. It goes into the area marked “in”, above. The sound then travels through R3 and C23 before coming into the op amp, which is set up as “non-inverting” with soft clipping via diodes. Non-inverting op amps are a key feature of many circuits. From there it goes into a variable low pass filter, which we’ve called “Tone”, before going to the volume control. Now, assuming i havent already lost you and your eyes have not glazed over, let’s take it step by step.

Up to this point our guitar signal is only going through R3 and C23, which looks like this:

A look of the actual parts so far is pretty simple at this stage:

Let’s add some more circuitry. We are adding an op amp after it goes through C23. As i mentioned, op amps are common in many circuits, but what is an op amp? It’s short for Operation Amplifier (Logical so far 🙂 ), and in our case this is going to “boost” the sound up enough for us to create some distortion or overdrive. This is going to require several parts to make it work correctly, and we’ll use an IC chip, or integrated circuit chip, in order to do this. Our Circuit now looks like this: Looking at the parts now, things are starting to fill out a little: In order to make the op amp work properly, we are going to “bias” the op amp using R41, which connects to a simple power circuit. This power circuit originates from the battery, marked BAT1 above. You’ll notice that there is a + or positive symbol, and the other side has a triangle pointing down. This symbol indicates ground, which can be thought of as the opposite of positive voltage in this instance. A battery has two different connections on it… positive and ground. On this schematic and in many simple circuits like this, all grounds are connected together even though they show individual triangles.

It’s just one of those “it’s commonly understood” type of situations amongst circuit builders. Also, these schematics, like many others, “assume” that the viewer knows which two pins are going to connect to the power. I’m indicating “wires” containing power by red, while “wires” that are at ground are colored black on the diagrams that show the part. As ever, you will be attempting these modifications at your own risk – if you invert your power and blow something thats on you 😀

From here let’s add a gain circuit with the op amp. We’ll also add an output capacitor, C3, and a “variable voltage divider”, or what we commonly know as the Volume Control. How do we do all that? Like this: 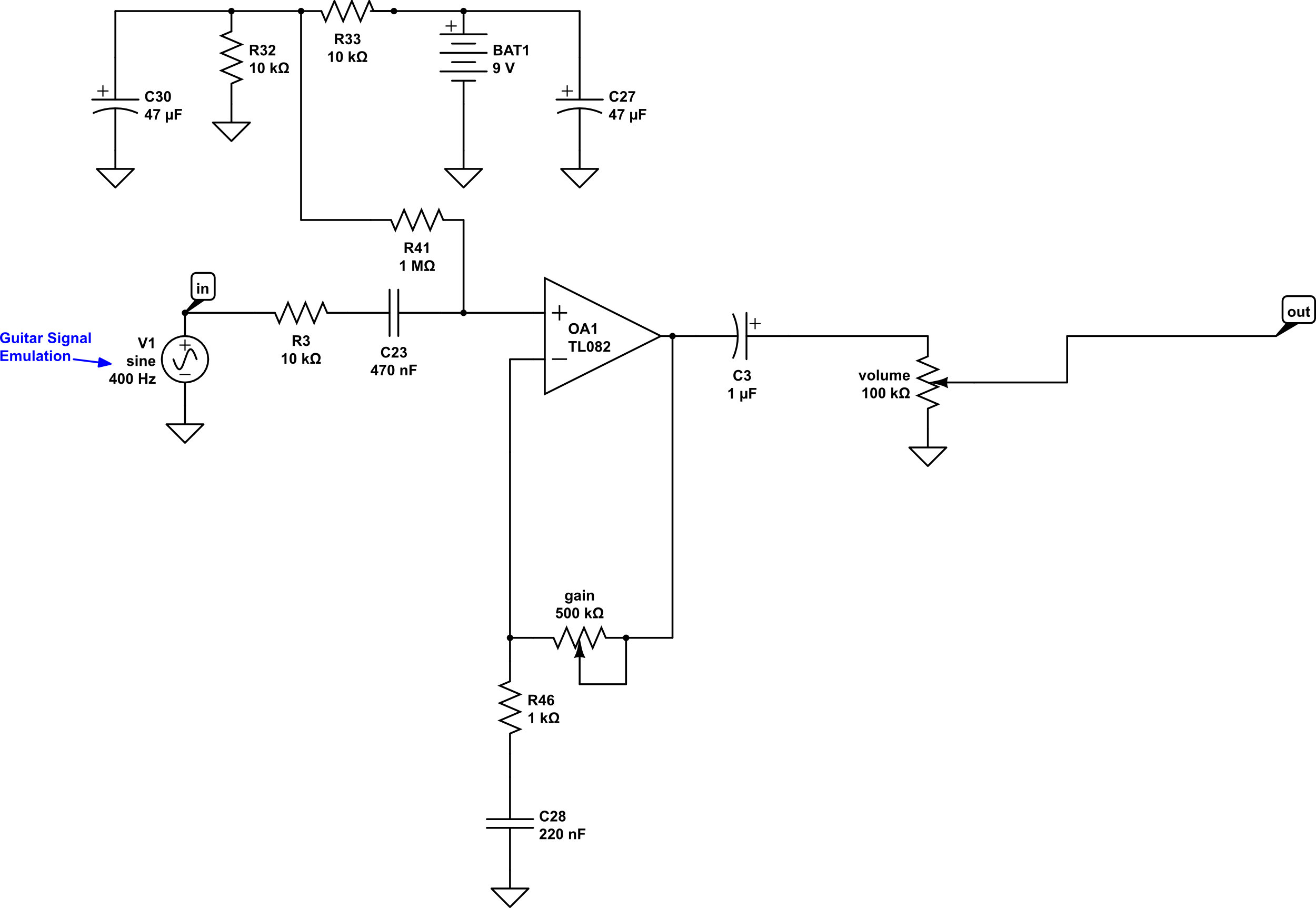 And again, let’s take a look at what that looks like from the parts-view: 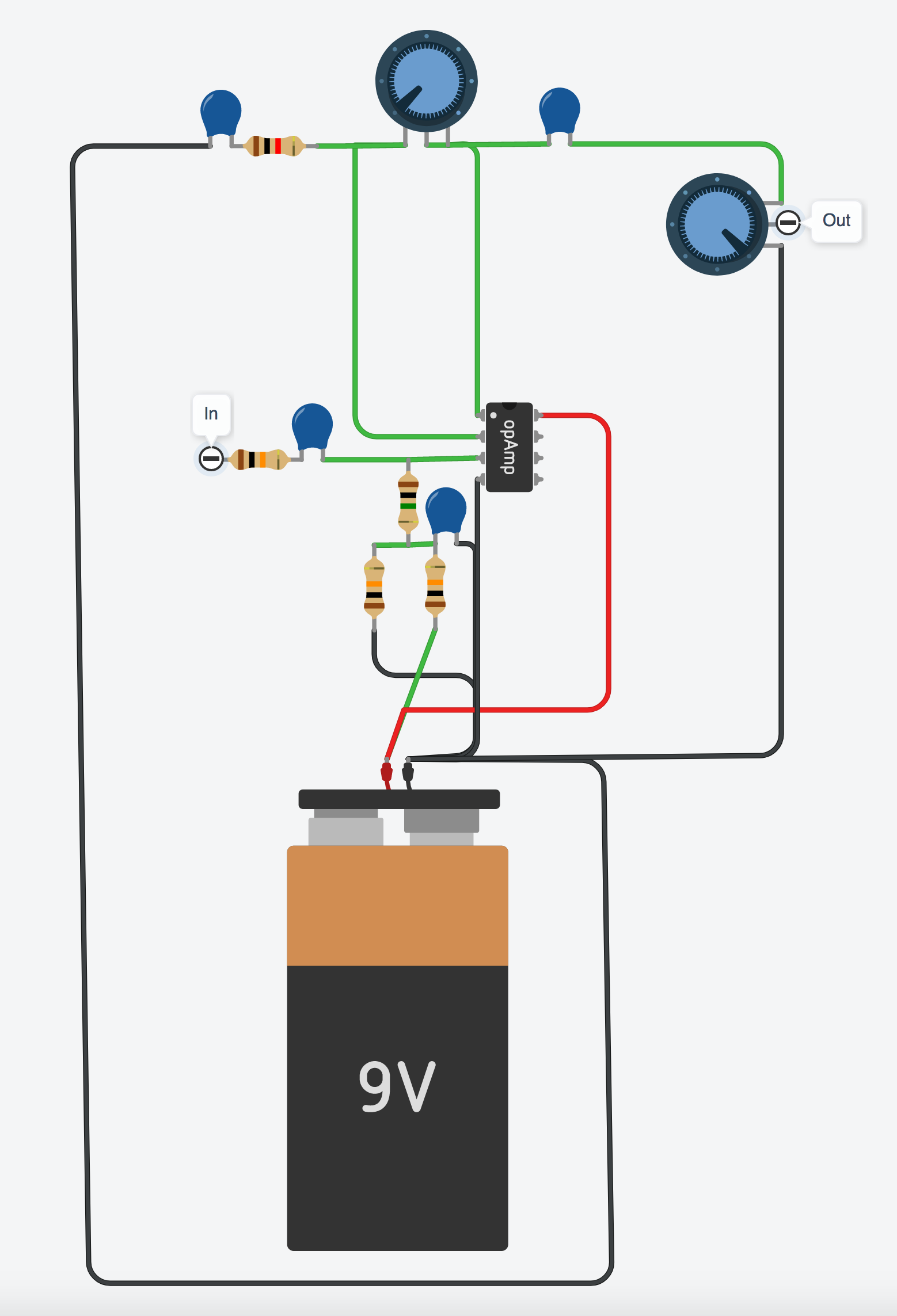 At this point we have a volume booster. If we turn the gain all the way down and turn the volume all the way up we basically have a buffer. That’s not exciting enough though, amiright?!

Let’s make this lil’ thing do some overdrive. One way to do that is just by connecting diodes between two of the pins of the IC chip. And, it’s good practice to put a small capacitor in parallel in parallel with the diodes and gain pot, as this helps sort of make the whole op amp circuit a little more stable, a little quieter, and controls some of the “fizz” inherent when clipping a signal. Here’s the same thing but the parts view: Now we have a basic overdrive pedal, but currently there is no tone control. Ya just gotta have a tone control. It helps to control the fizz and make sure the sound isn’t too bright for your tastes. Luckily adding one is easy peasy (now that is a phrase Ii don’t use often – the caffeine has kicked in!), let’s just put a simple tone control between the output capacitor, C3, and the Volume control. MMmmm. Coffee. 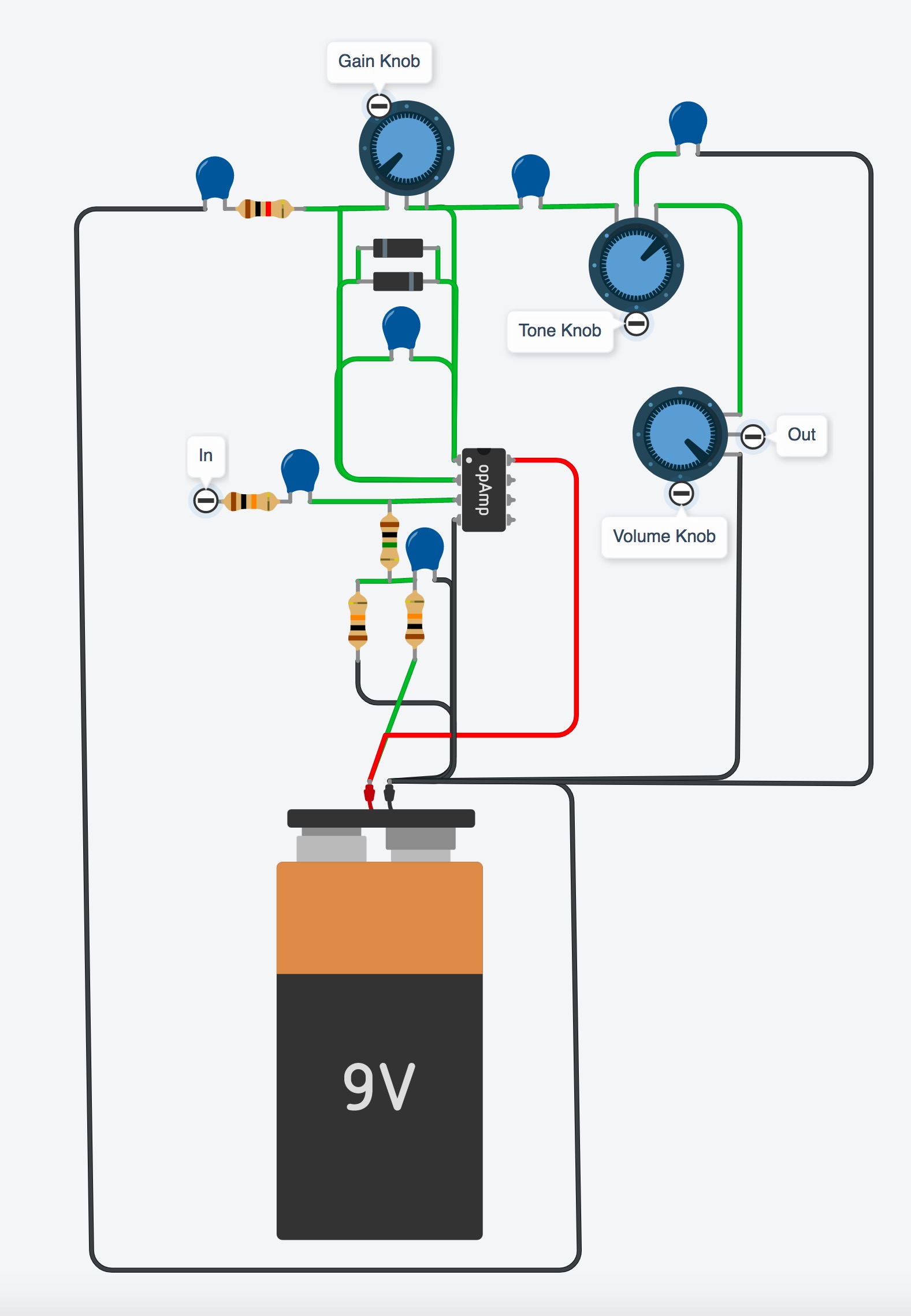 Boom! And there you have it – a completed, working overdrive circuit!

Keep in mind, this isn’t showing the bypass (IE on/off) switching, and there are ALWAYS many, many more ways to improve it or change it. If you want to check out how it sounds and go more in depth to what’s happening on a circuit level, make sure you check out my video here:

And if you want to deep dive further into modding your own pedals, well I plugged my books above I don’t need to do it again 🙂