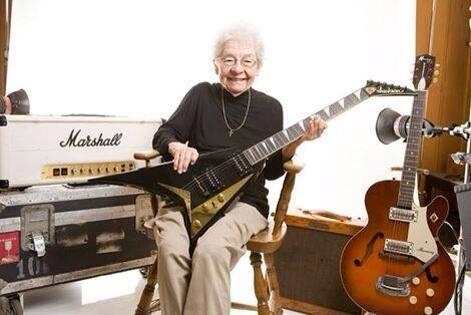 One of my favourite things about being a guitar player is that it transcends genres for so many people. During the 80’s and 90’s I was into heavy rock and it led me other music – Gary Moore led me to the blues, Steve Morse led me to Country and Randy Rhoads led me to classical, neoclassical – if you think about it, he was Yngwie before Yngwie bought his first pair of leather trousers. If you are not familiar with Randy listen to the Ozzy Osbourne Tribute album, released in 1987, to hear Randy at his fiery best. Simply awesome.

Randy died in March 1982, in the prime of his life, aged 25. A simply monstrous player who could play ANY rock guitarist under the table. While the world was going nuts for EVH, many were fascinated by RR – his style, technique and flair set him apart from everyone else. For me, if he had still been playing even 5 years later than that, would have quite probably the greatest rock guitar player to walk this earth. I shudder to think what his playing would have been today.

I am deeply saddened to hear of Mrs Rhoads passing. She was a wonderful woman and will be missed. I have no doubt she is reunited with Randy

Yesterday marked the passing of life long music educator Delores Rhoads, ‘Dee’, aged 95. Always hugely supportive of Randy from the time he started playing to long after his death, it feels like a part of rock history has moved away from us, quietly, without anyone knowing. Dee Rhoads had simply became a maternal figure for many of us players from that time and it’s so sad to hear of her passing. Like many people, this outtake of Randy recording “Dee”, a tribute to his Mother from the “Blizzard of Oz” album (this appeared on the Tribute album), never failed to make me smile.

I do hope she’s now with Randy as they have a lot to catch up on. Rest in Peace Mrs Rhoads, from this quiet corner of rock fandom, your influence will never be forgotten.