A few months ago I wrote a ‘review’ of the Quilter 101 Mini Head here in the Wampler blog, it was an interesting experience using the 101 Mini, but tonally it didn’t work out for me. It was great, just not there yet. There were issues with the basic core tone and most importantly, the strange EQ section.

I’ve subsequently got my hands on the newer version of this head, the 101 Mini Reverb, they’ve upgraded the unit considerably, made the EQ a much easier system to dial in and you guessed it, contains reverb. I’ve been using the 101 MR for the last few gigs as the ‘other’ side of my stereo rig, and something happened this weekend that made me look at it in a different light.

First of all, a quick gear rundown so you get a feel what my rig does. My rig is mono until it hits the incredible TC Electronic MiMiQ which then splits it to stereo. The main side of the MiMiQ (which sits after my pre gain modulation the gains stages and compression – so that’s pre gain Strymon Mobius – mainly Vibe – Mini Ego, Tumnus and Paisley Drive Deluxe) sends the signal on to the post gain side of the Mobius (so that’s chorus, tremolo etc), the Strymon TimeLine, dB+ and then to a Wampler Bravado amp. The other side of the MiMiQ just feeds direct to the Quilter 101 MR – both then feed directly into a stereo 2×12” speakers. I have the MiMiQ set on “slight drunk” so when it’s kicked in I find the difference in tone (I set it pretty quickly, on a scooped setting) and the lack of delays etc do a really good impression of a second guitar player.

I play in a pub band, playing covers, and on Saturday night we were kinda cookin’. The crowd was rocking, so we were. My rig sounded fantastic and I ended the first set on a high! I was just having a lovely time… when it came to the start of the second set we started and I noticed that something wasn’t quite right. None of my delay’s where there, so I checked a different patch (the vibe) and that worked, so I thought – oh shit, the TimeLine is knackered. There was something else going on with the sound as well, it wasn’t quite as attacky or bright as usual (I have the Bravado set on Bright position 4 with the mids scooped out so it’s more like a Fender Deluxe than it should be)… For about 3 songs I felt this thing was wrong, still sounded like me, still sounded great (well, let’s face it, with those gain stages how could it not?), but there was a certain something missing. Trust my wife to spot the problem… It the end of the third song she leaned over to me from behind the P.A. speakers and shouted in my ear “Do you know that the Bravado is on standby?”.

So, I had turned the Bravado on to standby at the end of the first set and forgotten to turn it back on again, which is quite funny considering the piece I wrote about putting amps on standby last year. it was just the Quilter being used and I was blown away with the sound of it. Granted, It was not as clear and concise as the Bravado, and the response was different, but it was close. Kind of felt the same way when I first played through a Kemper, really close but the reaction wasn’t there, because it’s a D class and I’m used to a valve amp.

Once I realised my mistake I tweaked the Quilter a little to try to bring the top end in and it got even closer before bringing the Bravado back in. This little thing is quite remarkable when I think about it, I carry it around in my effects case and it weighs about 2lbs and it stood up against the Bravado and didn’t lose without a fight. It took the pedals like a dream, it responded to my pick attack and expression like a dream. The updated EQ section was SO much better in this one, every issue I had with the original was addressed. Basically, this thing is pretty bloody awesome.

I’ve made the conscious decision that when we do the small, quiet gigs – as we often do – and you can’t get a valve amp up to the required level to make it sound like I want too (yes, we really do play that quiet sometimes, literally so you can talk over it), the Quilter 101 MR will be my main amp and the Quilter 101 Mini will be the stereo field. It won’t be the Bravado (as, you know, valve compression and response of a high end amp, there is nothing like it), but at least I can put it to the level I want to play at and I won’t be disappointed with the tone, which when you think about it, is quite remarkable.

I can thoroughly recommend this little amp, and I don’t say that very often. Everyone should have one in the front pocket of their gig bag as a back up, or if like me you want a stereo field, it’s perfect. Actually, if I wasn’t so fussy (I am, extremely) I would probably use it for every gig as let’s face it, the people listening wouldn’t be able to tell the difference in those conditions… It’s close enough to the real thing to be able to warrant the compromise of tone – that magical thing that can’t be replicated – especially when like me you have a history of sciatica and want to keep the weight down! 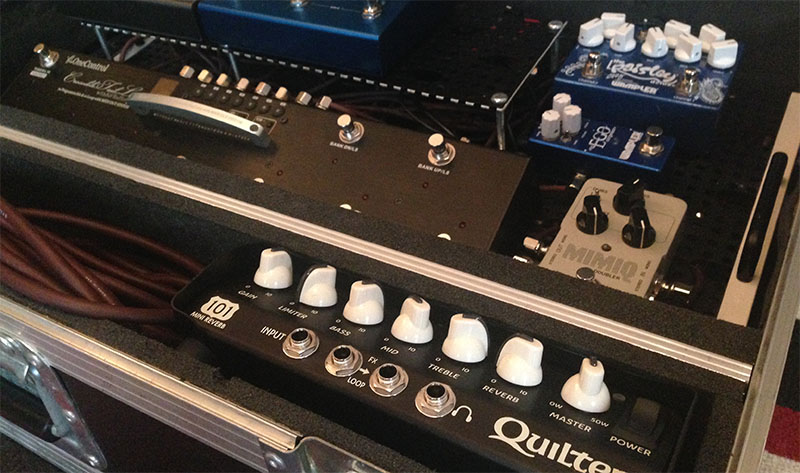