The Pantheon and associated pedals…

You may have noticed that we dropped a new pedal last week – the Pantheon Overdrive – a pedal that we’ve been asked so many times for I’ve stopped counting… it was Brian’s take on the old Marshall BluesBreaker pedal that was released in ’91 and discontinued not too long afterward. Safe to say it’s been well received by virtually everyone who has seen it and there have been some amazing demo’s out in support of it that shows just how good, and bad, it can sound in any given situation. I must say, release day is stressful and delightful all at the same time, I love it when it’s over but not as much as Lisa does, as apparently, I’m an arse in the weeks running up to it… basically, I think we all are as every release matters.

It’s been a blast reading all the internet arguments over it, so I thought I would do a little research and answer some of the questions that I’ve seen asked, maybe correct a few statements that have been said as fact, and give you an insight to the process that brought this latest tone machine to market.

This conversation started, as far as my failing memory allows, about 7 years ago, when myself and the Jeff Baker (who worked for us at the time) said to bDub that we need the following versions out of the following classic circuits. K, TS, and BB. The Clarksdale came a couple of years later once Travis and Max shouted about it enough, the Tumnus a couple of years after that because I was the one talking endlessly about it and finally, his take of the BluesBreaker is now here – because we kept seeing the same things on line. Not only were people asking for Brian’s take, but they wanted one NOW. The reason these three have taken so long to materialise is that Brian doesn’t actually enjoy making and designing pedals like this, for the want of a better phrase, something that is close to an existing circuit, he would rather start from scratch but the overwhelming amount of people made it impossible for us to ignore them, they wanted it bad, so we provided!

The main interesting thing I’ve seen is that one of the dealers put the pedal up on their site for sale using a version of the dealer copy we sent them. Now, it may surprise you to know that we consider ourselves a B2B business and we sell to businesses far more than we do to end customers. So, we have different versions of our copy that goes to different customers. Different things are highlighted, different benefits are shown. Basically, when we ‘write’ with the end customer in mind, it’s all about the tone and how we think it will make a player sound the best they can. When we ‘write’ to the retailers, it’s all about “look at how many of these you can sell”. After all, you know, we are a business and we intend to stay in business for as long as we can – so we market hard to all of the customers in the way that appeals to them the most… Most retailers aren’t interested in tone, they are more interested in a pedals USP and how many they can sell.

A lot of people jumped on a few things from this straight away, and it was jumped upon extremely passionately. It always is. The gear market, when you look at it objectively, is sometimes hilarious in its partisan views about companies. We have customers who love us and appear to want to fight to the death in order to protect our reputation, and others do so as well for other companies… which is the reason heated debates happen… As a point of interest though, one of the guys who was shouting the loudest about us being cloners on Facebook did so with a profile picture of him with a Suhr classic S in his hands. Pretty certain I don’t have to explain that one too much…

OK, so back to the point of this. Yes… the Pantheon is a direct descendant of the old Marshall Bluesbreaker  (note – the Pantheon was originally going to be called Paragon, but we changed it). In that respect, it’s no different from the JHS Morning Glory, or the AnalogMan King of Tone, Prince of Tone, the Snouse BlackBox and countless other pedals I can mention. The only one of those that is an original is the Marshall, the rest are variations of. Please note, the Xotic BB is NOT a Bluesbreaker style, it’s a TS with a baxandall active bass and treble, but that’s another story.

I have written this from my own limited knowledge of circuits, so forgive me if it’s not 100% accurate – pretty certain it’s on point though, I didn’t feel the need to properly learn this stuff as I know a guy who’s fairly well versed in it all. It’s the same reason he didn’t learn PS, AI, FCPX etc etc. To show good form though, I’m not going to publish our own schematics of these pedals, but take the ones that are readily available online – but I will show you part of the Pantheon schematic, although part of it will be obscured… but worry ye not, I expect the full reverse engineer of it to appear online before I’ve finished writing this sentence.

To quickly go back to the Xotic BB, here is the schematic of that, as you can see, it’s got 4558 in it so it MUST be a TS, right? But seriously, it’s basically a modded TS circuit. One that sounds amazing… so, let’s not have any more BB is a BluesBreaker conversations please!!

Here is the original schematic of the BluesBreaker… for the purpose of this conversation, I’m going to be mainly referring to the one marked as “Original Wiring” that has been presented with Comic Sans. I apologise for you having to witness something in Comic Sans, it is out of my control. Please take the time to look at it and then compare it to the others that follow.

Next up, the JHS Morning Glory. The cornerstone of virtually every P&W board I’ve ever seen.

As you can see, it’s pretty bloody close to the original. There are some obvious changes most importantly there is a jFet volume booster at the end that has the potential to be really very loud on the output (other pedals afterward beware lolol)… Which is interesting as the main issue I remember from the original BB was that it was just too darn quiet, so Josh identified the main issue and boom, fixed it. You’ll also notice that it has a switch on it, which flits between normal amounts of presence and some more, giving it a little more flexibility.

From here, let’s go to the GrandDaddy of all the descendants of the original BB, the mighty King Of Tone. There is nothing I can say about this pedal that hasn’t already been said, it’s got the greatest reputation for good reason, because it nails that tone perfectly. In my opinion, it was the BB that Marshall should have made in 1991.

Here is the schematic.

As you can see, once you adjust to the fact that there are two identical circuits running side by side, if you look at one side only there is once again a handful of difference between this and the others, we have some internal dip switches to change the clipping style, an internal trim pot for presence and the high gain version just has a different value gain pot IIRC. Therefore, neither of these pedals could be deemed to be an original, just a development of the original theme.

Moving on… here is the actual schematic for the Pantheon as drawn by Brian. 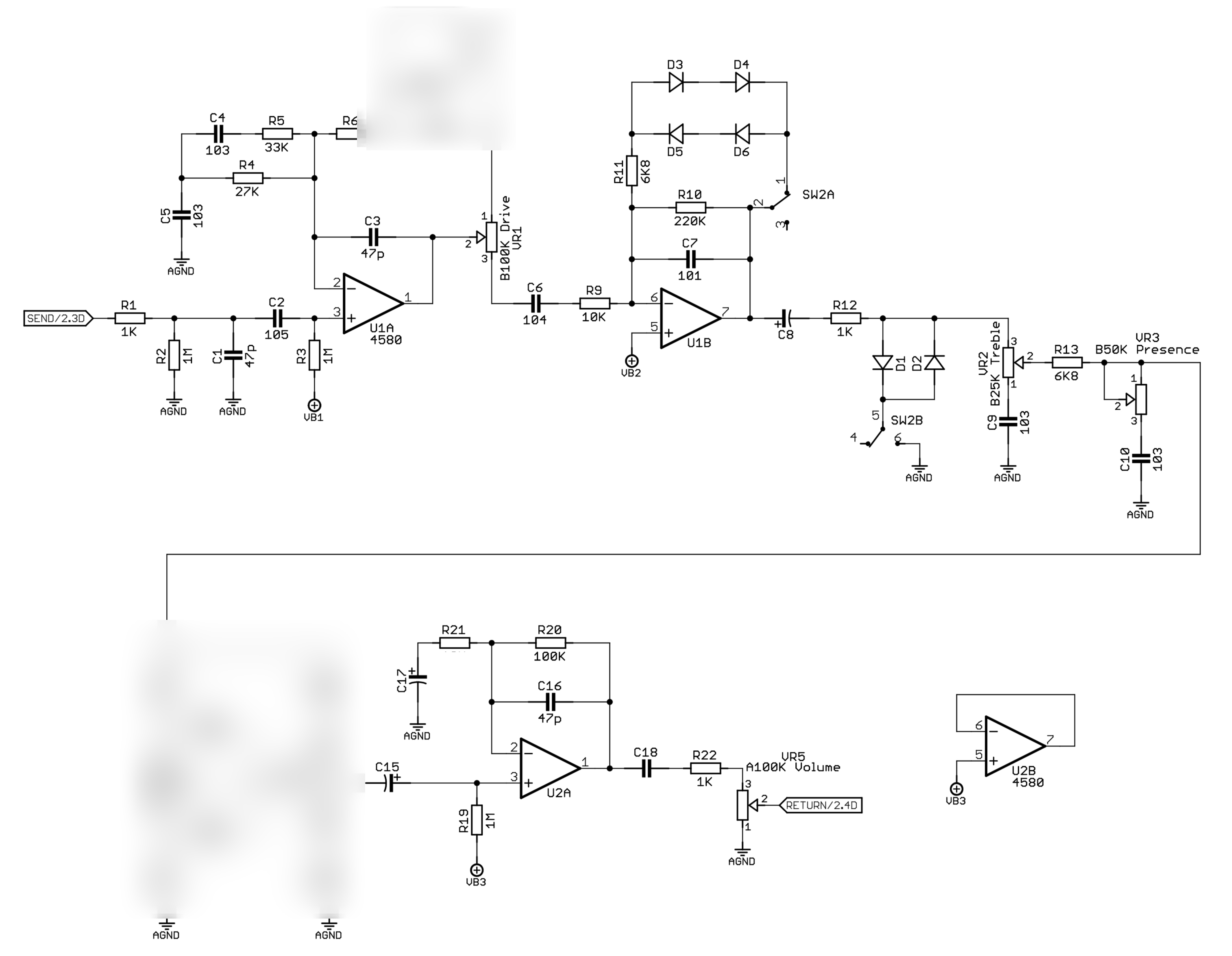 Once again, it’s pretty bloody close to the original, with a couple of changes put in for good measure that Brian always puts in. But, fundamentally it’s the same thing as the others with a couple of tweaks. All controls are on front and there is a bass control done in the way he prefers. We have soft, hard and combined clipping… same thing, just done differently.

If you want to know the differences, here they are in a nutshell.

BluesBreaker
The original = noninverted opamp, through some EQ stuff, into an inverting opamp, into fixed/set presence control and out again.

Morning Glory
Increased quality of parts, has increased output and presence switch. In terms of the circuit, it’s louder and more versatile.

KoT
2 pedals in one, exclusive style diodes that are of increased quality (that are hard to come by), presence and clipping options inserted easily inside and the option to have the gain pot replaced for a higher gain version. The differences are in the circuit that around R3 you get a little more highs and a little more gain – overall, it’s just more flexible.

Pantheon
All controls on front, increased quality of parts, 3 way selection of clipping diodes, 3 switchable stages of gain, converts the signal upon exit to a much lower impedance than the others (meaning, it “buffers the signal”), adds even more stability due to the style of parts used… we think it’s the best so far.

What do we have in conclusion… well, each offers something different in terms of user interface and options. They all sound pretty similar and you can make each sound like the other if you are that way inclined… it’s all down to, I think, this. Which one turns you on the most for whatever reason. All are built in the US, all have increased quality of parts, all are more stable than the original, all have increased outputs… but in terms of originality and ‘mojo’… well… the evidence shows you otherwise – the last original BluesBreaker circuit came out in 1991!